The annual Sheikh Zayed Charity Marathon, known as the UAE Healthy Kidney 10K Race is scheduled to take place in New York’s Central Park in April 2019. Founded in 2005 in honour of the late Sheikh Zayed bin Sultan Al Nahyan, the first President and the Founder of the United Arab Emirates, the 10 kilometre-run raise awareness of kidney health and kidney disease with proceeds going directly to the National Kidney Foundation, a specialised hospital for kidney treatment and research in the United States. In 2014, the Zayed Charity Marathon launched its Egypt edition, which will take place in Ismailia on 28 December 2018.

Khalaf Ahmad Al Habtoor said, “We are proud and remain committed to support the Zayed Charity Marathon in New York which awareness for a good cause and honours the generous, caring spirit of the Founding Father of the UAE. I encourage our young men and women to volunteer in events similar to this that help promote the true image of the UAE to help us spread global awareness on the patronage of Sheikh Zayed and promote Emirati heritage and culture around the world.”

Lt. General Mohammad Halal Al Kaabi, Head of the Organizing Committee thanked Al Habtoor on his leadership role as a shining example by generously giving to help promote awareness of kidney health and kidney disease both at home and abroad.

Lt. General Mohammad Halal Al Kaabi said “I would like to thank Khalaf Al Habtoor for his continuous support of the Zayed Charity Marathon. Sheikh Zayed bin Sultan is always in our hearts and we live by his guidance daily. The Zayed Charity Marathon is a celebration for the United Arab Emirates and every Emirati in New York supported by participants from all of our government departments.”

What started as a small event with 500 registered runners in 2005, today the UAE Healthy Kidney 10K is part of the New York Road Runner’s Pro Racing Series and draws tens of tens of thousands of people annually making it one of the top 10 marathons globally.  To date, over 200 thousand people have contributed helping the Zayed Charity Marathon raise more than $165m to support millions of patients at risk.

Colonel Mohammad Ali Amer, General Coordinator, Zayed Charity Marathon commented “The Zayed Charity Marathon celebrates its 15th anniversary next year and we are working on making the milestone a memorable experience with extended promotion at New York’s famous Times Square and a display of the UAE flag and the photo of Sheikh Zayed on the Empire State Building.”

Mohammed Al Habtoor, Vice Chairman & CEO, Al Habtoor Group, said “We were well received and thrilled to see the welcome message on display at NASDAQ’s tickers at Times Square during the 2018 edition. The event evoked positive sentiment by bringing together nationalities from across the world for a very worthy cause.” 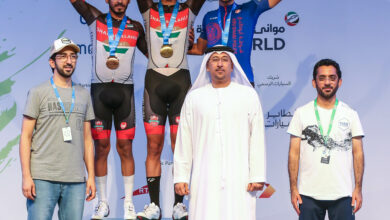