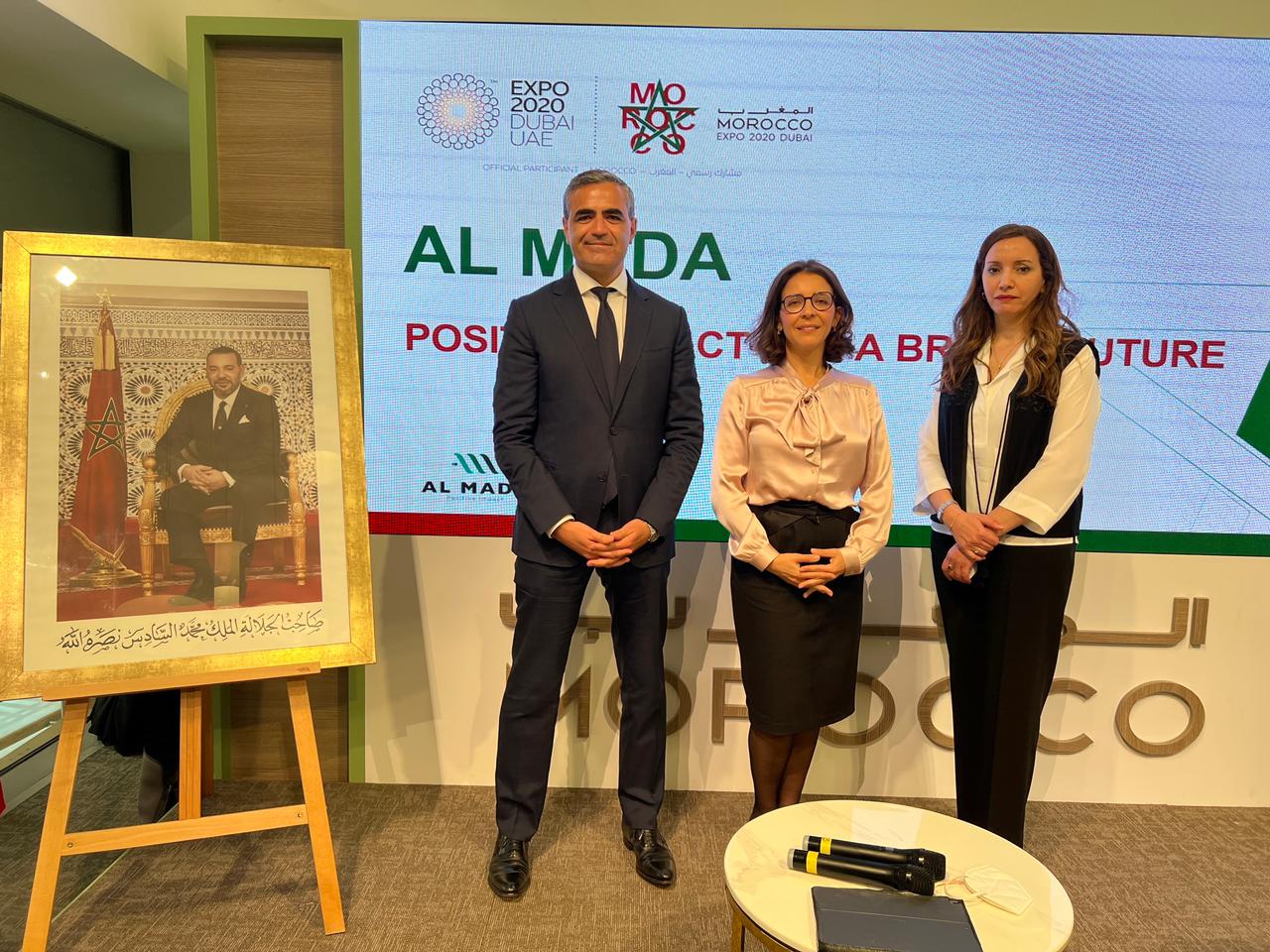 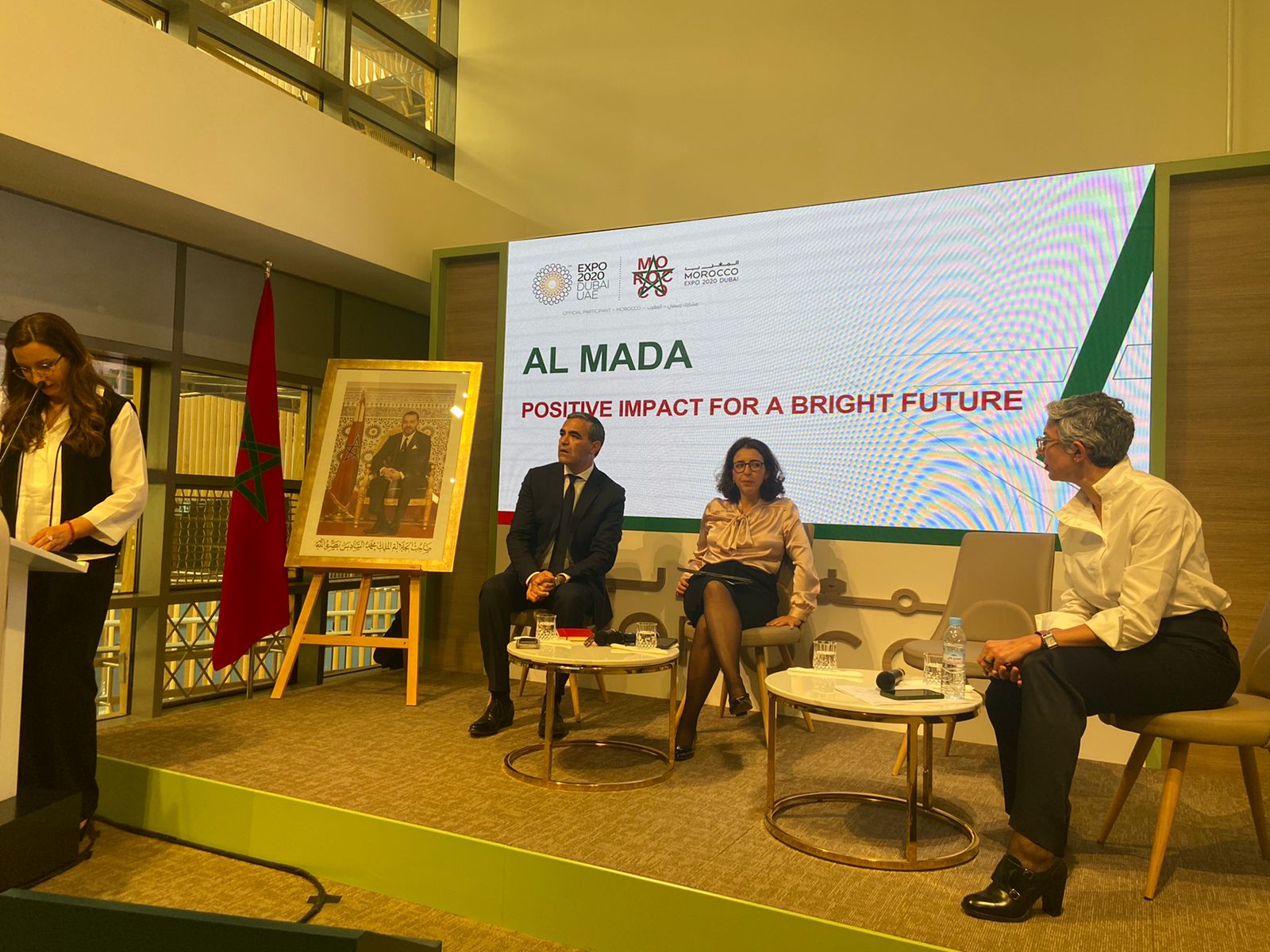 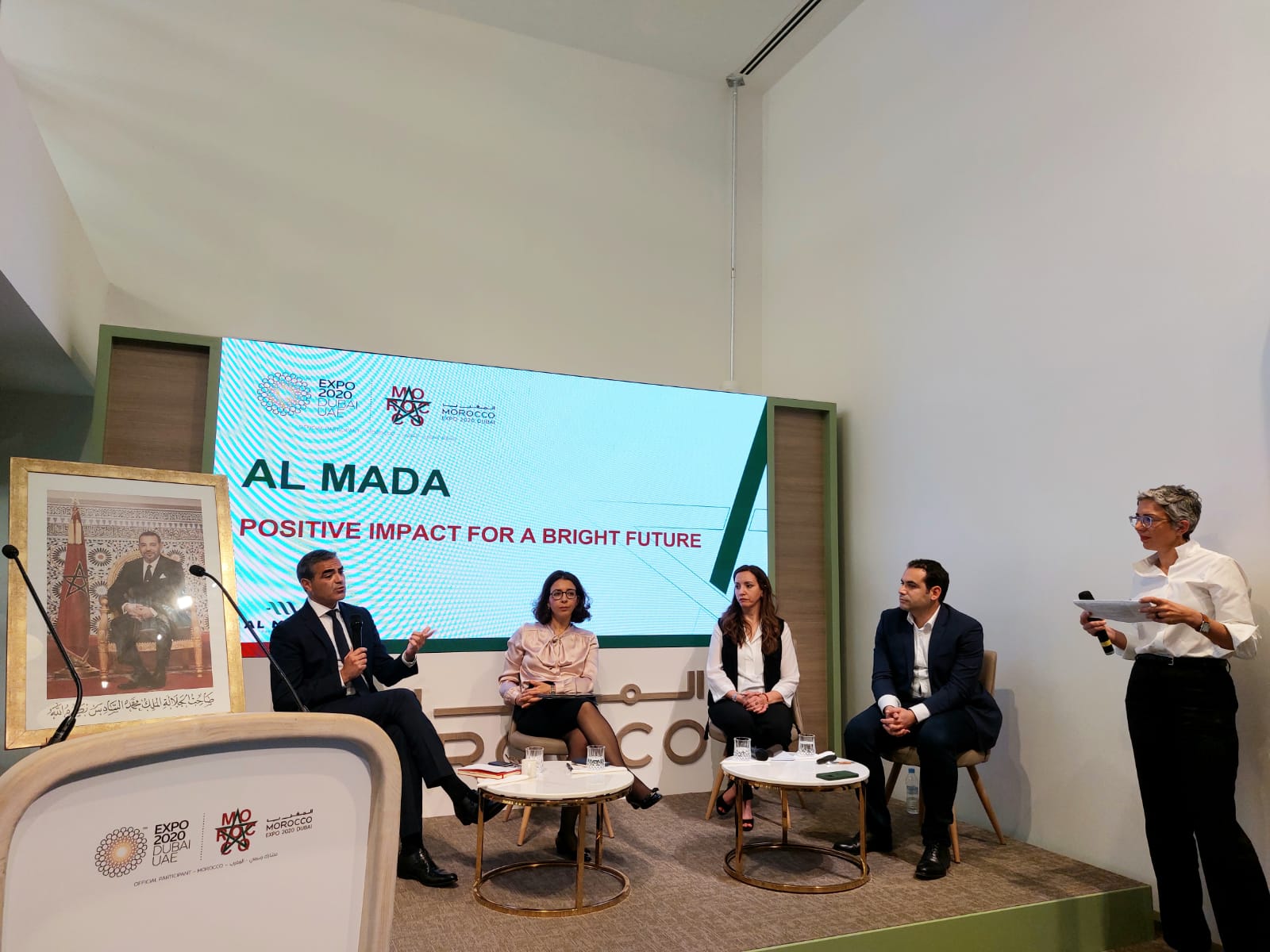 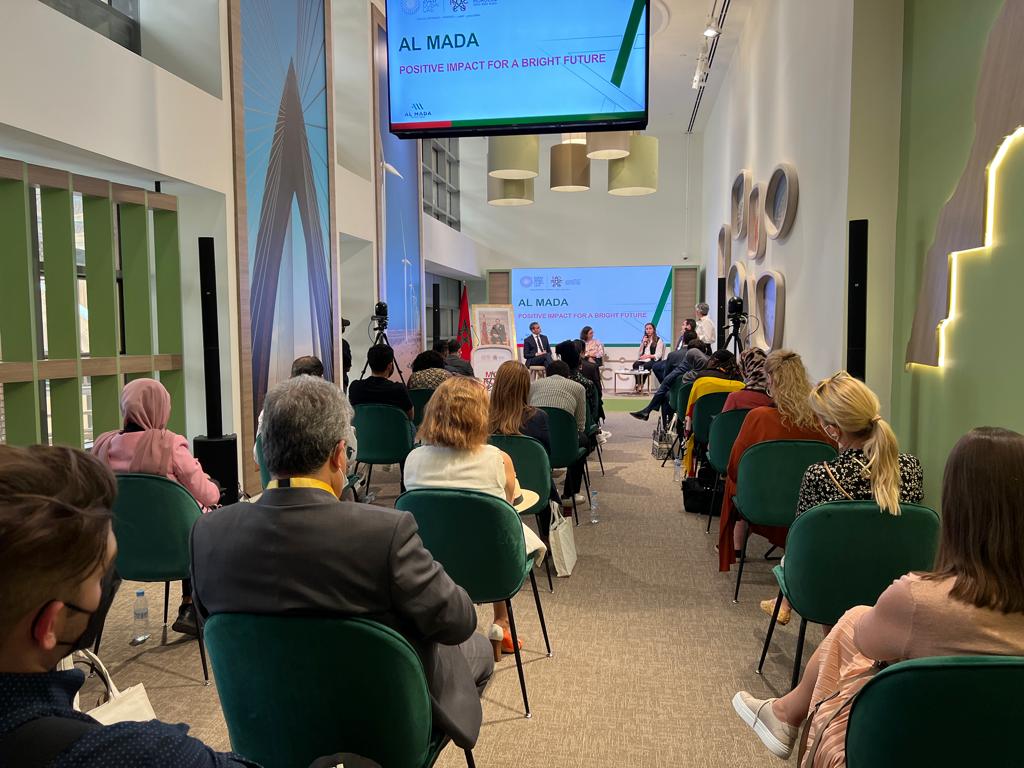 On the occasion of Expo 2020 Dubai, Al Mada, a pan-African private equity fund, held a conference on March 24,
2022 at the Morocco Pavilion under the theme « Positive Impact for a Bright Future ».
This was an opportunity to reaffirm Al Mada’s influence on a pan-African scale and to share its strategic vision
regarding the positive and sustainable impact of its activities and to honor youth and solidarity.
Al Mada strives to always promote shared value and champion economic, social and environmental inclusiveness
in all its initiatives towards sustainable growth. By doing so, Al Mada stays true to its Arabic name and its signature,
Positive Impact. 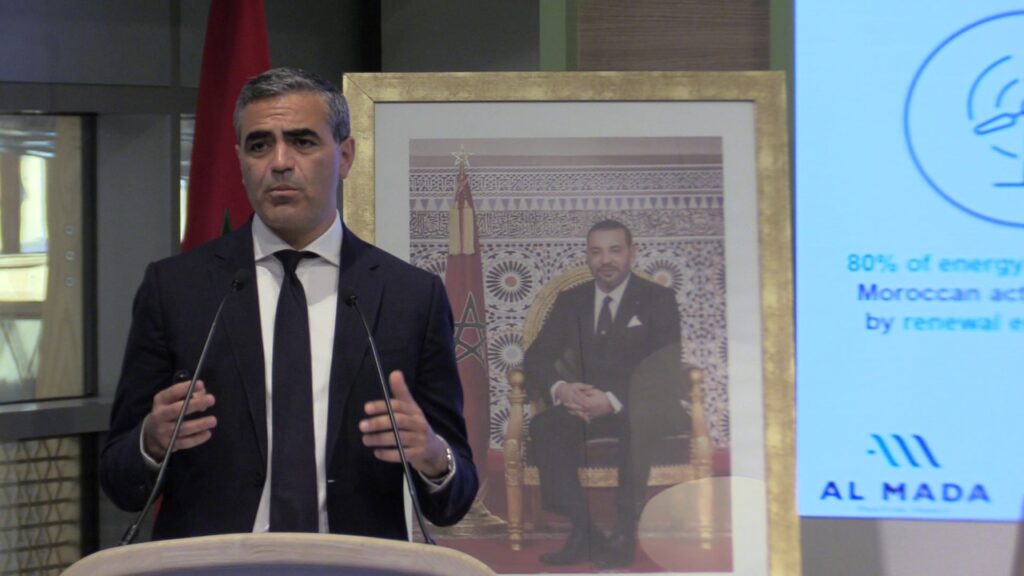 Al Mada’s ambition for sustainability and solidarity dates more than three decades ago. During this period,
the fund has been committed to deliver strong sustainable impacts through the actions of its entities, who all
share the same purpose: building a prosperous Africa. 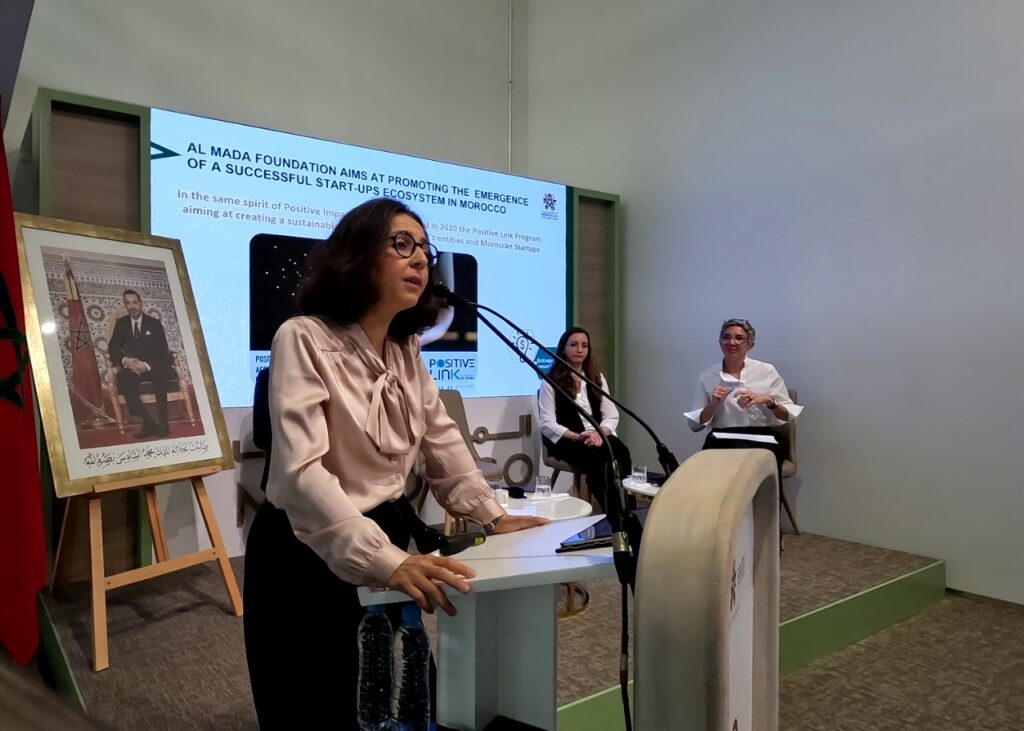 During the conference, representatives of its entities and Foundations were able to highlight Al Mada’s commitment
by presenting the key actions in terms of social and environmental responsibility. In Art & Culture, Education and
Entrepreneurship, the actions of Al Mada and its subsidiaries all hold the same ambition: building a better future
by implementing sustainable socio-economic and environmental initiatives with a « Positive Impact » orientation.
Al Mada Foundation is committed to democratizing access to art and culture through a triple mission: raising art
awareness among the public, supporting the artistic education of youth and promoting the value and influence
of the Moroccan and African cultural heritage. 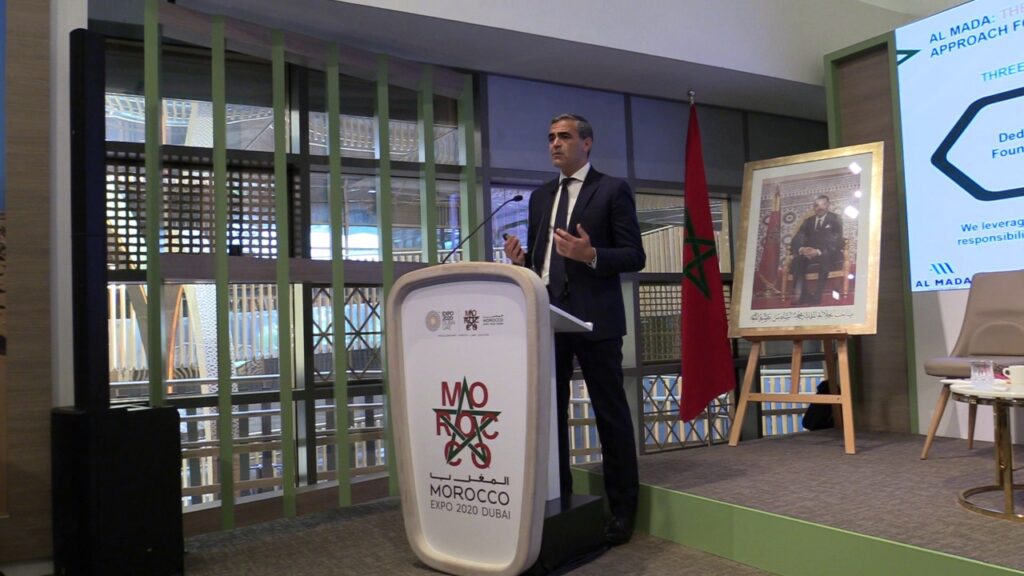 As part of its commitment to entrepreneurship, one of the Foundation’s priority missions is to support start-ups
delivering innovative services and to contribute to the emergence of a new generation of Moroccan entrepreneurs
as well as an ecosystem of successful start-ups.
To this end, Al Mada Foundation launched « Positive Link » in 2020, a program that echoes Al Mada’s signature
and is fully committed to promoting innovative start-ups and entrepreneurship. The approach was to set up
a privileged collaboration framework, which has taken the form of contracts with the fund’s entities, as well as
the possibility of benefiting from Al Mada’s support and know-how for the development of proofs of concept,
mentoring, sponsorship and other support measures. To date, nearly 300 contracts have been signed between
start-ups and the investment fund’s various entities. New support services are being structured to provide more 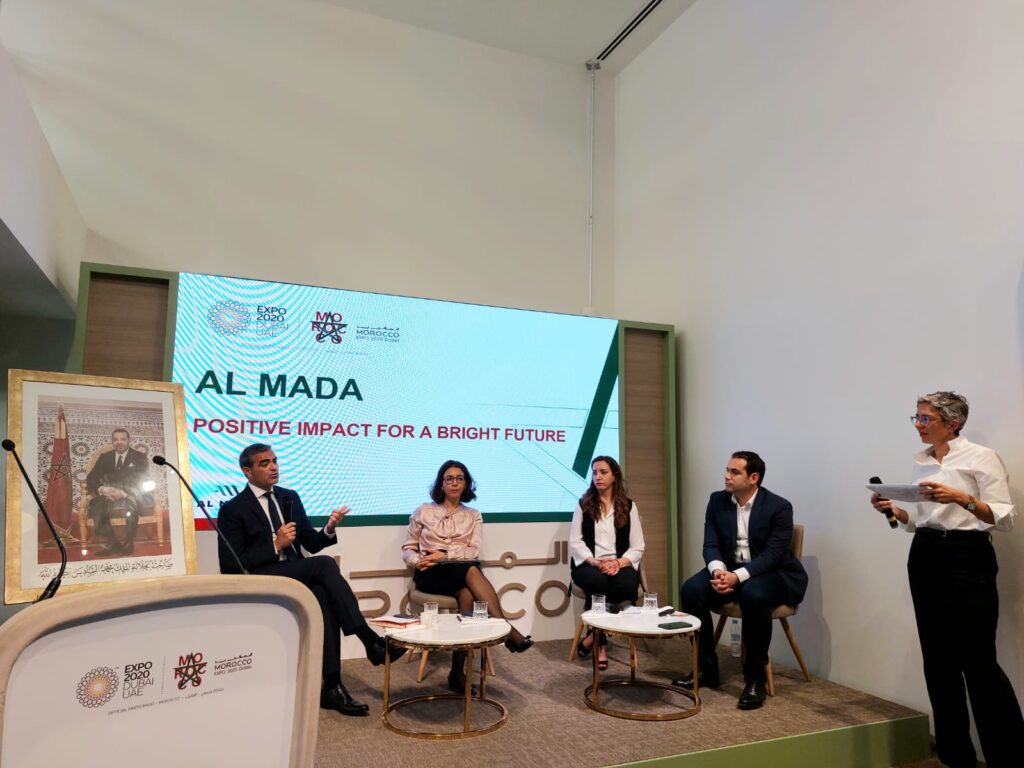 support to start-ups in their development. Testimonials from start-ups that have benefited from this program
all attest to the success of the program.
With regards to education, Injaz Al‑Maghrib, an association created in 2007 under the impulse of Al Mada,
is developing in close collaboration with the business world numerous educational program for Moroccan youth in
order to stimulate a spirit of initiative and a taste for entrepreneurship. Since its creation and through its various
programs, Injaz Al‑Maghrib has trained more than 300,000 young people in entrepreneurship in 22 cities and
about a dozen rural areas in the Kingdom.
Injaz Al‑Maghrib has also promoted entrepreneurship by combining its efforts with Al Mada’s entities know-how
and expertise. Among other initiative approaches, it has developed innovative programs such as “Jamaati” with
Managem, aimed at primary school pupils in rural and mining areas, or “Cooper Up” with Managem for the benefit
of cooperatives established in mining areas, and “Akabar Al Maarifa” with Nareva, aimed at educating primary
school pupils in environmental conservation and responsible entrepreneurship.
In the face of the health crisis the world has known, Al Mada Foundation has also been fully committed to national
solidarity efforts through actions targeted at local populations.
Al Mada’s participation in Expo 2020 Dubai was an opportunity for this pan-African major player to demonstrate
its commitment as a responsible, supportive and civic-minded investor, placing meaning and purpose at the heart
of its actions and forging a strong link with the territories and communities around it. 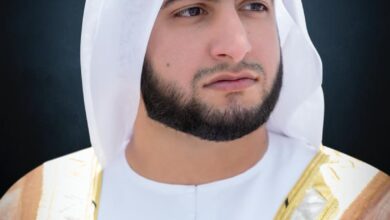