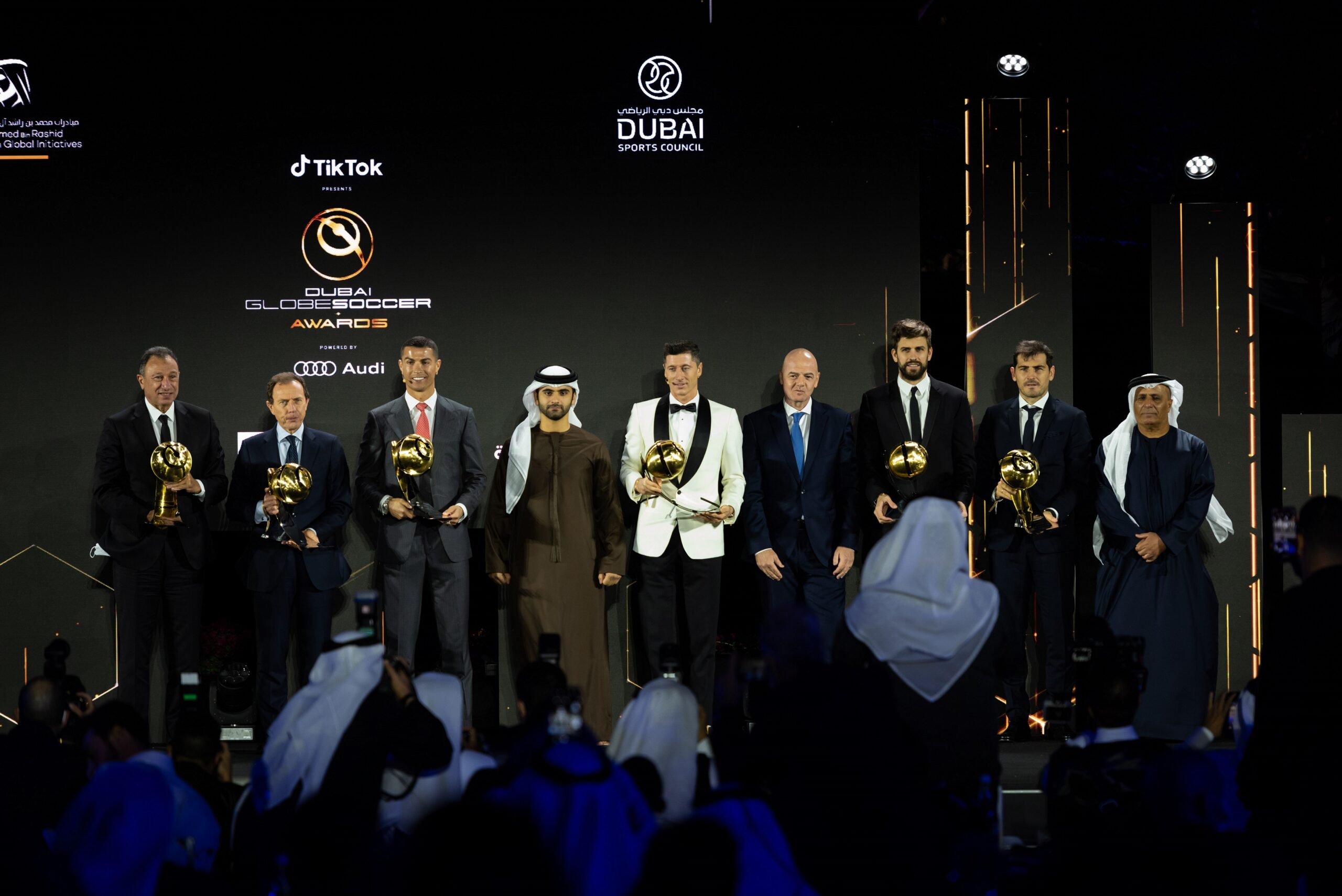 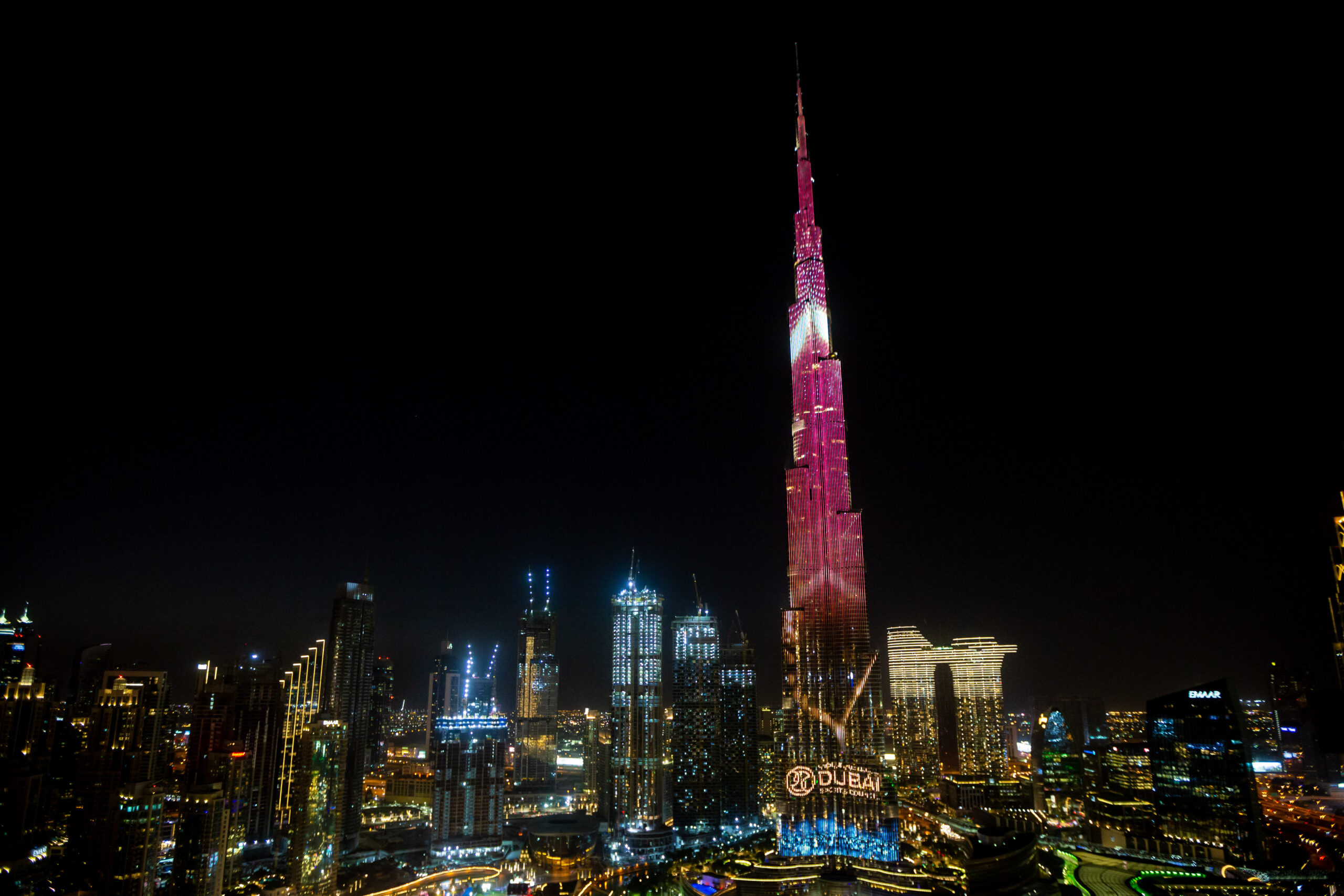 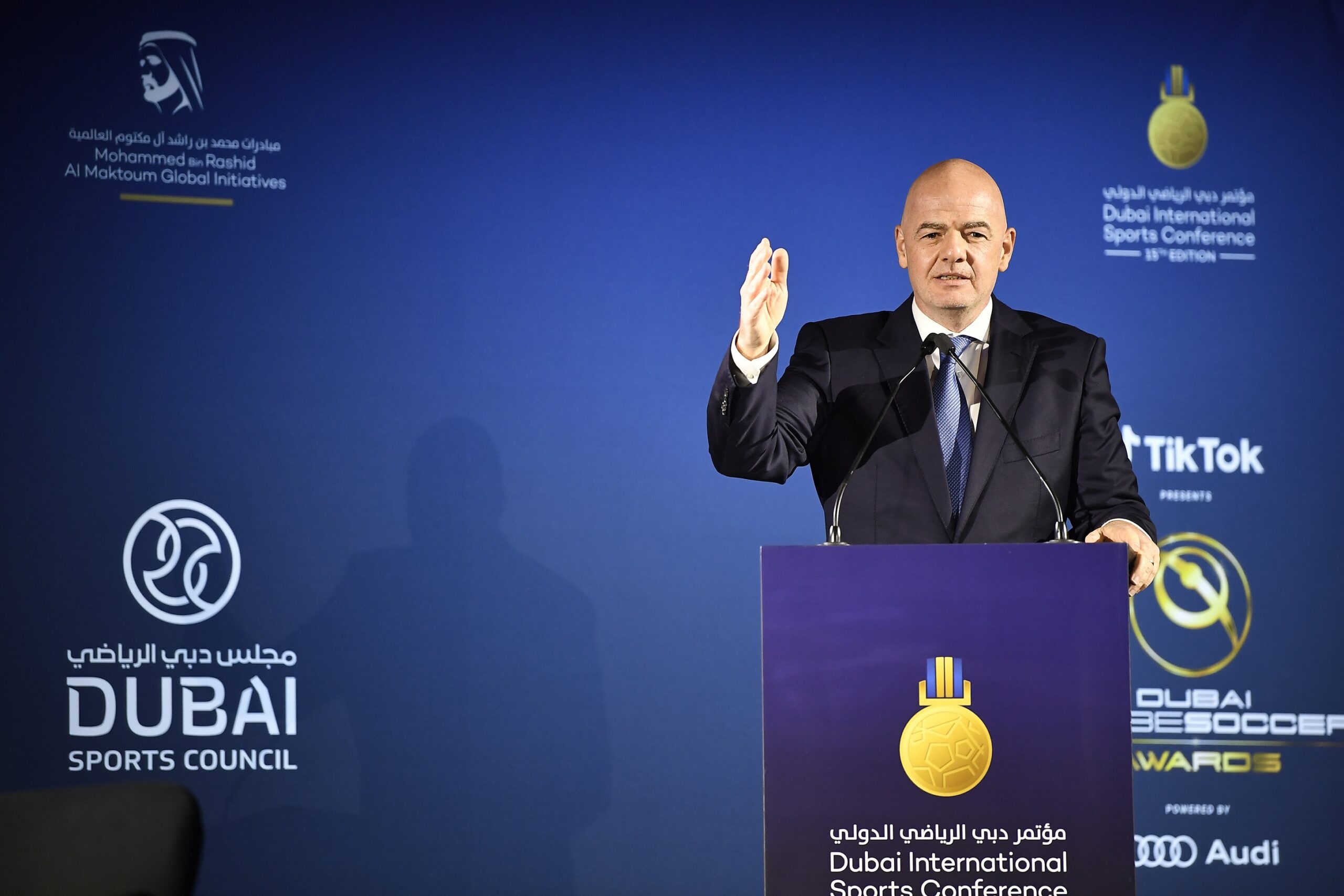 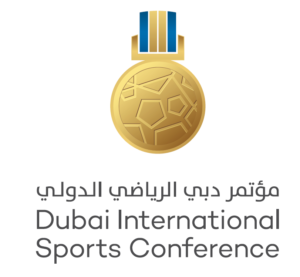 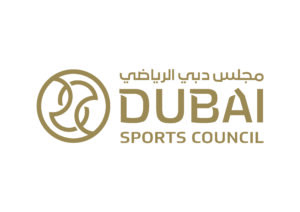 FIFA President, His Excellency Gianni Infantino has described football as a beacon of hope and a harbinger of peace, unity and solidarity as the world recovers from the disruption and desolation caused by COVID-19 pandemic.

Watched by His Highness Sheikh Mansoor Bin Mohammed Bin Rashid Al Maktoum, Chairman of Dubai Sports Council, His Excellency Infantino made the point in his keynote address, titled “Message from the Summit”, at the Dubai International Sports Conference, which took place on Sunday evening at the Armani Hotel with the majestic Burj Khalifa forming the backdrop.

His Excellency Mattar Al Tayer, Vice Chairman of Dubai Sports Council, was present at the Conference alongside His Excellency Humaid Al Qatami, Director General of Dubai Health Authority and First Vice Chairman of the National Olympic Committee, and HE Saeed Hareb, Secretary General of Dubai Sports Council, as well as a number of heads of sports federations, and boards of directors of clubs and football companies, and also representatives of local and international media institutions.

Addressing the gathering, His Excellency Infantino said: “It is a great pleasure for me to be here tonight with you in this incredible place for the 15th edition of Dubai Sports Council’s Dubai International Sports Conference.

“I have been coming to this Conference quite a few times, but I think this year is a special year, and the fact we are here united and reunited, marks a little step – not yet into normality – but a little step into the right direction and that’s why it is so important for us and for you to be here, and I would like to thank you all for being here.

“It has been a difficult year. It is a year which we will remember because of the pandemic, because of COVID19, because everything stopped, because football stopped as well and because we realised that there is actually something more important than football and that is health. 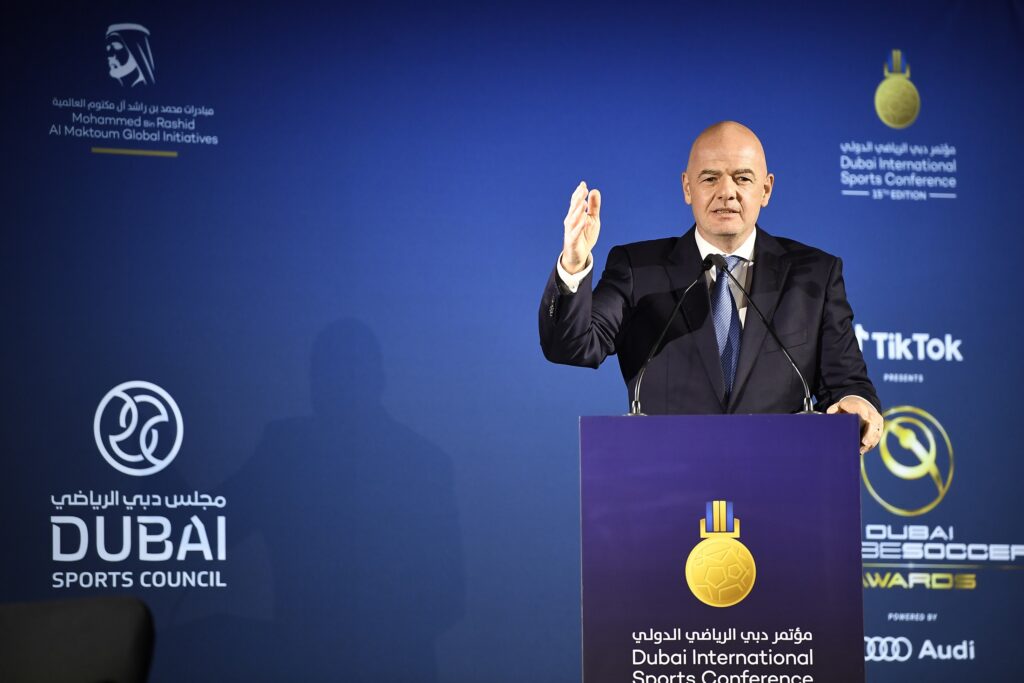 “We were not aware, all of us, that so much is dependent on how we are and how our neighbours are and how our families and friends are until we saw that a small virus has put on its knees the entire world. We all have to wear masks now, we have to keep social distance.

“We have to thank all those who have been fighting as volunteers, as meds, as doctors in order to keep and to save our lives. And we got to think of those who suffered in this particular year.

“But in this very year and in the year to come, football can give a new message, a message of unity, of solidarity, and of hope. And these are not just words because we all need – after being distanced, after being locked down – we all need again to believe that the world is going back to normal, that we can again hope, and football is certainly giving hope.

Infantino spoke about the USD 1.5 billion COVID-19 Relief Plan that FIFA has created to support the game in its 211 member associations and six confederations, and to help alleviate the financial impact of the pandemic. But the 50-year-old Swiss-Italian also suggested the ‘Beautiful Game’ should use this time to introspect and plan for the future of a truly global football.

“In FIFA, we have tried to help a little bit,” Infantino said. “We have created, as you might have heard, the COVID-19 Relief package worth USD1.5 billion to help, not the top professional game, but to help the game all over the world in 211 countries –the grassroots game, the women’s game stay alive, to keep the flame of football burning, and in order to be ready when we can resume again.

“But this period where we have been locked down has also given us possibilities to think about the future of football, of course. With football being the most important of the less important things, maybe we need to start reconsidering the way we have been organising football so far.

“We need to consider this and I say this very openly, questioning whatever we, including FIFA, including Confederations, Associations, Leagues have been doing in the last 20 years, or 30 years or 40 years. Because the world is changing, because the world is going faster, the world wants more excitement; the youth, the young boys and girls, they strive for maybe a different type of organisation of competitions as we are used to.

“So we need to put all this on the table and this will be the challenge of the year 2021 and the following years to come for us in global football.”

“Football is global,” Infanino added. “The fact we are here today in Dubai which is a global city, is a testimony of that. And the vision of FIFA is certainly to make football even more global than what it is today. Because even if football is global, the reality is that it is concentrated, of course, in a few countries only and we need to make this bigger with new ideas, new ways, and a new globalised game of football.

“This is the task, this is the mission of FIFA, of course, to organise, to generate, to distribute revenues in the entire world. This is what we are try to do with the help of all those who are partnering with us, and we need to do it even more so in the future.” 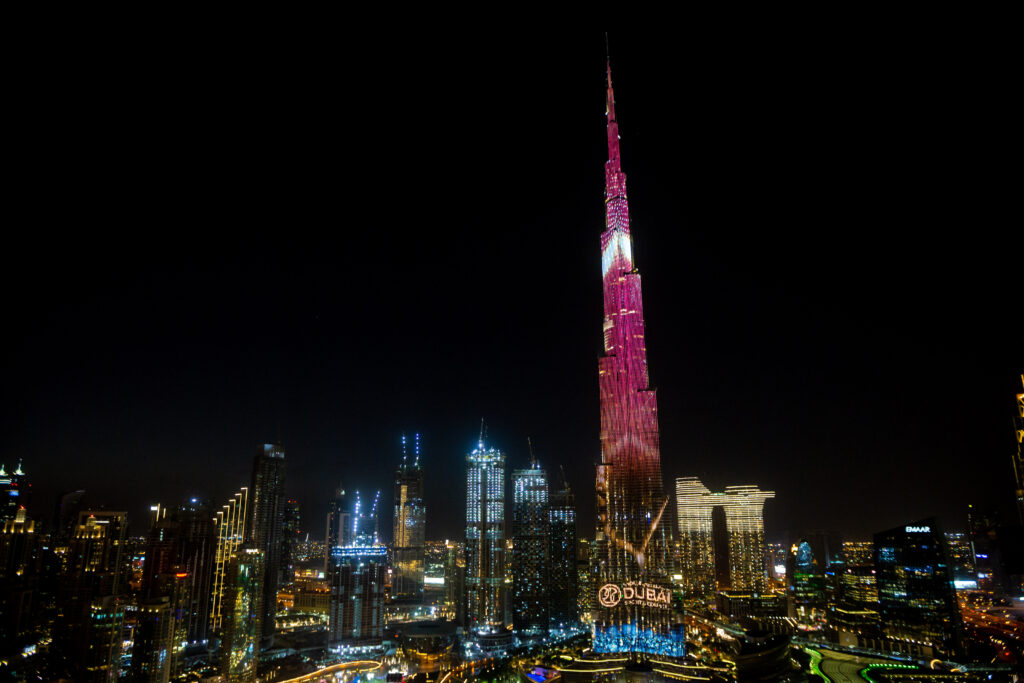 His Excellency Infantino also talked about the power of football to heal, and mentioned the historic “Abraham Accords” peace agreement between United Arab Emirates and Israel, which subsequently led to the signing of an agreement between the UAE and Israel Football Associations.

Infantino was present at the signing of the deal between the two football bodies, and he said: “I am very happy to be here because another signal of the power of football has been given only recently here in Dubai, two weeks ago or less, where we witnessed the signature of a historic agreement between the United Arab Emirates Football Association and the Israel Football Association, following, of course, the much more important political agreement.

“But it is important that, following politics, we can also have the real life kicking in, and in the UAE and Israel joining forces to develop women’s football, to develop academies, to develop football together sends, I think, a very powerful and strong message, which is what we want to do and continue to do as well in the years to come.

“I said it is a very special year and I would like to remember a great legend, Diego Armando Maradona, who left us a few weeks ago,” said Infantino. “He was also at home here in Dubai, and he is certainly one of those who have made us all fall in love with the game.

“Another legend that left us is Paolo Rossi. Of course, as an Italian myself, I cherish the moments I was watching with my parents on TV the 1982 World Cup where Paolo Rossi scored six goals. Also, he has left us much too early.” 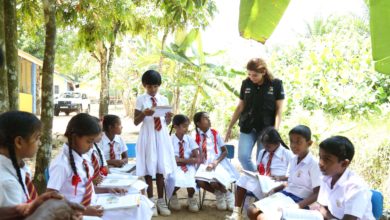 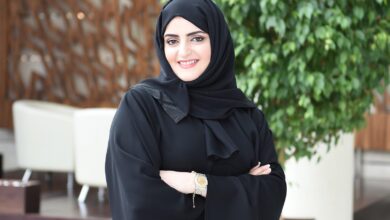